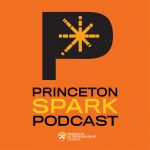 Welcome back to the Princeton Spark. On this episode on taking risks, we go to a different type of matchmaking. This is Daphne, founder of The Vendry.

Daphne Earp Hoppenot, Princeton graduate 2010. And I am an entrepreneur based in New York City, who founded a company called The Vendry, which is an online platform that is connecting brands who are investing in events and live experiences with the venues, the vendors, and the promotional good companies that they need to hire for their events.

Before The Vendry, Daphne ran partnerships at Yext, an enterprise software company in New York City for seven and a half years. She opened the Berlin office during her last seven months at Yext.

And to be totally honest, I mean, I grew up at Yext, like it was my everything. And I, for the entire time I was there. I couldn’t imagine leaving. And I think it just sort of came to me quite suddenly, but in a very peaceful way.

I agreed with yet to basically moved to Paris where my husband’s originally from Paris, okay, and so he was going to move from New York there. And I was going to move from Berlin there to meet him and I was going to work for that office. And what I felt happening from my career, which just starts playing a little bit into the risk that I wanted to take was, I was really comfortable. I knew that I had everything I needed at Yext. I could sort of, you know, increasingly coast there and sort of maybe increasingly vague positions, as they were like, “Go help in Paris, we got you.” And that’s great. But I was 29 years old, and I had no real desire to coast. And I felt that it was just the time to sort of say, you know, this chapter of my life was awesome. And I want to make sure that I can sort of stand on my own as a professional and as a wannabe entrepreneur without the comfort of this machine behind me.

But was her next move fleshed out?

Not at all! So I literally called my husband in Berlin, and he had already quit his job and moved to Paris for my job.

WS: Wow. So that sounds risky.

Yeah. So that was a phone call, because it just literally came to me in a flash and I was like, “This is the cleanest, best time for me to transition to something new.” And so I called Pierre and I was like, “Hey, I know you quit your job to move to Paris for me, but actually, I also want to quit my job.”

And so I pitched him. I was like, “Look, look, we don’t need to freak out. Let’s still move to Paris.”

They still moved to Paris. They spent the next year living in Airbnbs. He worked on freelance projects remotely, and she set out to find her next path.

And I guess through my soul searching in Paris, I just totally got that entrepreneurial bug. I love New York City, I’m totally obsessed with New York City and just the work culture here. And so both Pierre and I – he also was itching to come back and start his own company, which is an architecture firm – and so we decided to move back. I decided, I wanted to start a company and I had all these ideas. And so what I started doing was, I started putting together pitch decks as if I was pitching an investor something.

I think there were two ideas early on, totally different, that I dropped fairly quickly. But the truth is that at the same time, I was planning my wedding – Pierre and I got married in Franc – and I was feeling a lot of these pain points around event planning specific to sourcing vendors and managing them, as the event planning rolls out. And so I started seeing in the back of my mind, I feel like there’s room for technology to make this all much more efficient. Personally didn’t feel much passion for the wedding market. Also, there’s already been a lot of investment from the venture side into that market. And so Zola raised $100 million last year, Wedding Wire and The Knot merged and so I just didn’t feel that that market was big enough to merit another big player. But tapping into my experience at Yext running partnerships, and then also the consumer thing, pop-ups everywhere, brands investing in IRL, I knew that there was something in that space.

Thus, The Vendry was born. And…

And so Pierre and, I moved back to New York last fall, September. And that’s when I started talking to potential angel investors about raising an angel investment round. Also found out I was pregnant, which was a little bit of a surprise.

New companies for both of them. New baby. New York.

We were jumping into the unknown. We’re like, we’re doing this and we’ll figure it out, and that’s how it’s played out.

And I was very lucky, I guess, speaking a little bit about just going through pregnancy as an entrepreneur, You know, every woman and every family is going to have a totally different experience. And any parent knows that. And So I was very lucky in that I had a very easy pregnancy. And it just I literally worked until the last day. It just wasn’t a thing.

And we didn’t have an easy start to parenthood. So we had some unexpected events that made the first two months of parenthood really difficult. But, you know, you just work through it. And we had supportive families. You know, we were very lucky in that regard.

It’s already been quite a journey. Daphne had this reflection on it.

I think, you know, after you guys asked me to do this podcast, I thought about what I felt What I felt I had taken in this journey. And I think there’s one big glaring one, which is that I feel I’m somewhat risking my reputation. And that is a risk that I took on without needing to, right? I think I built a very good professional reputation and networking at Yext. And I think I easily could have stayed at Yext and, you know, chosen that path or taken another high paying job somewhere else. And instead, I chose to basically start my own company, go to all the most powerful people I know and say, “Hey, make a bet on me, will you give me some money?” And that is a risk I didn’t need to take and I did because I have conviction in myself and The Vendry. But it’s a risk. It definitely is.

After the break, we’ll meet two men who have embarked on a venture capital journey in an unlikely place.